The term microservices portrays a software development style that has grown from contemporary trends to set up practices that are meant to increase the speed and efficiency of developing and managing software solutions at scale. Microservices is more about applying a certain number of principles and architectural patterns than it is about architecture. Each microservice lives independently, but on the other hand, also all rely on each other. All microservices in a project get deployed in production at their own pace, on-premise, on the cloud, independently, living side by side. 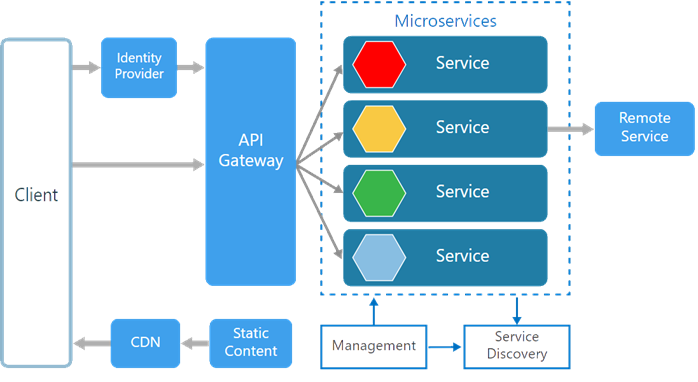 Management. Maintains the nodes for the service.

CDN. A content delivery network to serve static resources. For example, pages and web content in a distributed network.

Microservices are deployed independently with their own database per service so the underlying microservices look as shown in the following picture:

Monolithic applications are more of a single complete package, having all the related needed components and services encapsulated in one package.

The following is the diagrammatic representation of monolithic architecture whether packaged completely or service based. 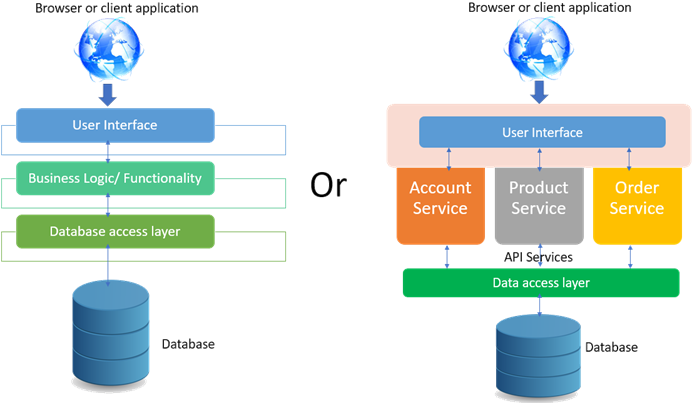 A microservice is an approach to create small services, each running in their own space that can communicate via messaging. These are independent services directly calling their own database.

The following is the diagrammatic representation of microservices architecture. 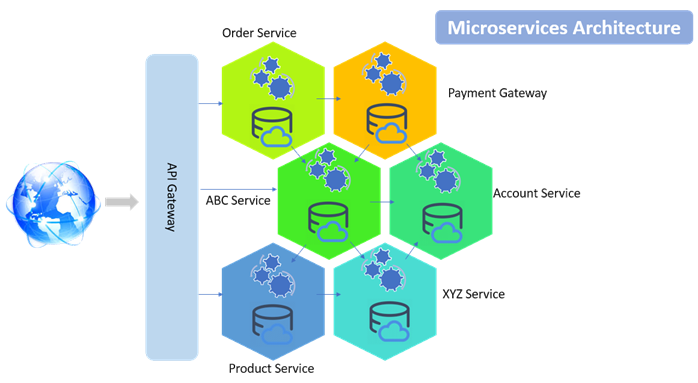 In monolithic architecture, the database remains the same for all the functionalities even if an approach of service-oriented architecture is followed, whereas in microservices each service will have their own database.

Containers like Docker (and others) slice the operating system resources. For example, the network stack, processes namespace, file system hierarchy and the storage stack. Docker is more like virtualizing the operating system. Learn more about Docker here. Open this URL and click on Download from Docker hub. Once downloaded, login to the Docker and follow instructions to install Docker for Windows. 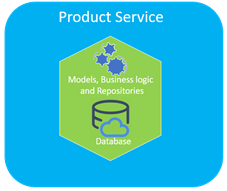 Though .NET Core API project has inbuilt support for EF Core and all the related dependencies are downloaded at the time of project creation and compilation that could be found under SDK section in the project as shown below. 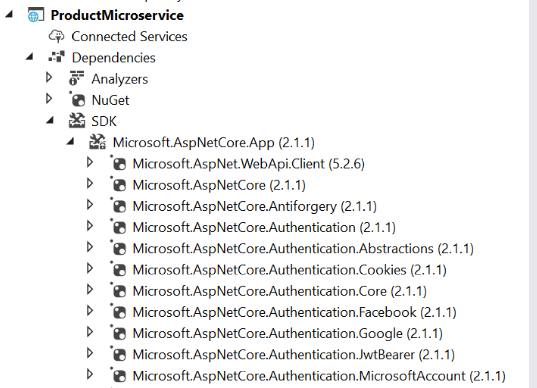 Microsoft.EntityFrameworkCore.SqlServer (2.1.1) should be the package inside the downloaded SDK’s. If it is not present, it could be explicitly added to the project via Nuget Packages.

A database context is needed so that the models could interact with the database.

Repository works as a micro component of microservice that encapsulates the data access layer and helps in data persistence and testability as well.

The microservice should have an endpoint for which a controller is needed, which exposes the HTTP methods to the client as endpoints of the service methods.

Migrations allow us to provide code to change the database from one version to another. 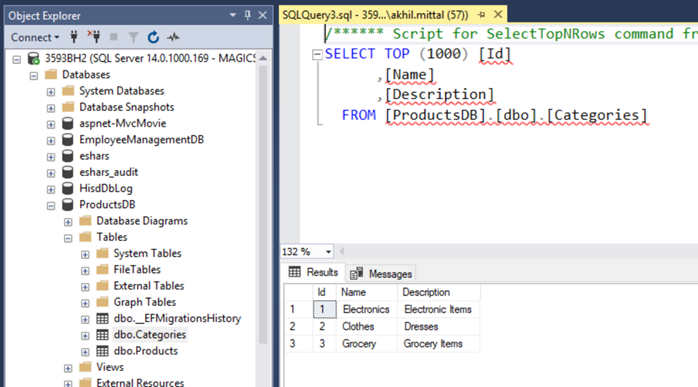 The service could be run via IIS Express. For example, Visual Studio default or via Docker container as well.

The application will be up once the browser page is launched. Since it has nothing to show, it will be blank, but the service could be tested via any API testing client. Here Postman is used to testing the service endpoints. Keep it opened and the application running.

Install Postman if it is not on the machine and launch it. 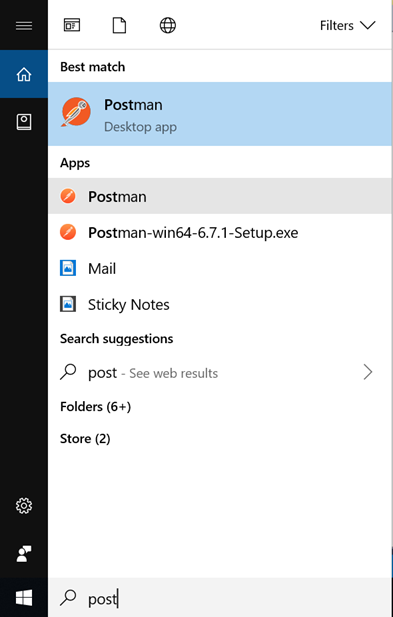 To test the POST method (i.e. creating a new resource), select the method as POST in postman and provide the endpoint (i.e. https://localhost:44312/api/product). Then in the Body section, add JSON that has similar properties of the Product model as shown below and click on Send.

The response is returned with the Id of the product as well.

The “Post” method of the controller is responsible to create a resource in the database and send the response.

The line return CreatedAtAction(nameof(Get), new { id = product.Id }, product); returns the location of the created resource that could be checked in the Location attribute in the response under the Headers tab.

Perform a select query on the product table and an added row as shown for the newly created product. 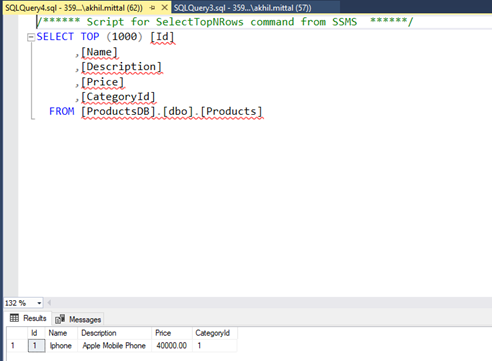 Create one more product in a similar way. 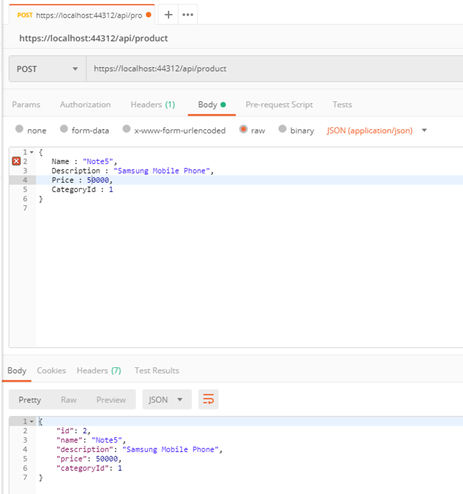 Perform a GET request now with the same address and two records are shown as a JSON result response.

Perform the delete request by selecting DELETE as the verb and appending id as 1 (if the product with id 1 needs to be deleted) and press Send.

In the database, one record with Id 1 gets deleted.

PUT verb is responsible for updating the resource. Select the PUT verb, provide the API address, and in the Body section provide details which the product needs to be updated in JSON format. For example, update the product with Id 2 and update its name, description, and price from Samsung to iPhone specific. Press Send.

Check the database to see the updated product.

This proves that the microservice is running on two endpoints and on two operating systems independently locally deployed.

A microservice is a service built around a specific business capability, which can be independently deployed and is called bounded context. This article on microservices focused on what microservices are and their advantages over monolithic services architecture. The article describes how to develop a microservice using ASP.NET Core and run it via IIS and Docker container. Likewise, the service can have multiple images and can be run on multiple containers at the same point of time.