There was an era of monolithic software applications where the whole application was packaged and deployed on a single server running as a single process. As we all know, with this model a single point of failure could bring the entire application down.

Kubernetes was software you can download and deploy in a local environment, but most cloud hosting services provide built-in Kubernetes services that help you orchestrate cloud-hosted functions and microservices in their environment. In this article, we’ll demonstrate how to orchestrate the deployment and scaling of an entire ASP.NET Core application in the cloud using Docker and Microsoft’s Azure Kubernetes Services (AKS).

You’ll need a valid Azure account for the deployment, and we’ll be using the following applications on the development machine.

Once Docker for Windows is installed and running, go to the settings and enable the checkbox for Kubernetes as shown below. 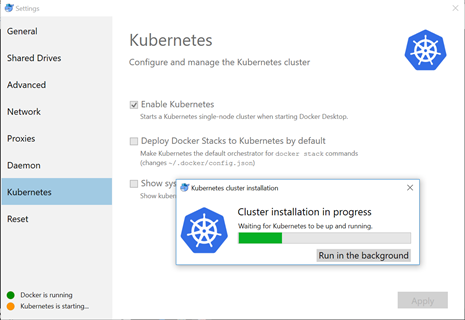 After Azure CLI installation, run the following command (az –version) to make sure the CLI is up and running.

I created a simple ASP.NET Core application that you can clone or download from https://github.com/akhilmittal/Azure-Kubernetes-Service.

Once the project has been either cloned or downloaded and unzipped, execute the dotnet run command as shown below. This will run the server and tell on what port the server is listening for the application i.e. http://localhost:5000. 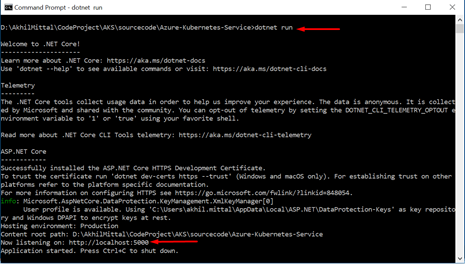 Open a browser and navigate to the provided URL, typically http://localhost:5000. You’ll see it’s just a simple application showing the host or container in which the application is running. Currently, it runs on a development windows machine without a container and so it shows the name of the host machine, in this case 3593BH2.

Now we’ll use Docker to create a container for the ASP.NET Core application. I’ve already done some of the work in the sample download, so we don’t have to go through every step of creating the container.

Navigate to the root of the application directory to see the already created Docker file. This Docker file will be used to build the image. 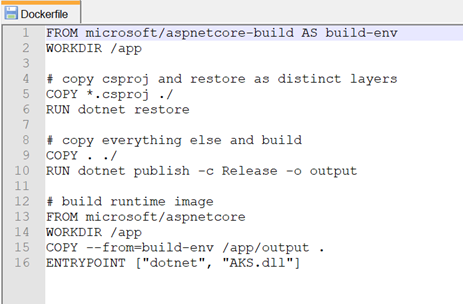 The runtime image is built using the docker build command as shown below.

Make sure that you are in the directory that contains a Docker file and then run the command. If you’re not familiar with the syntax, the dot indicates that the Docker file is located in the current directory and the -t switch allows you to specify the tag aks:local.

This will kickstart the build process.

To test this image, run a container based on this image by using the docker run command:

The -d switch tells Docker to run this as a daemon process. The -p switch maps port 5000 on the host to local port 80 on the container.

Execute command docker ps to see the container up and running.

Now go to the browser and connect to http://localhost:5000. 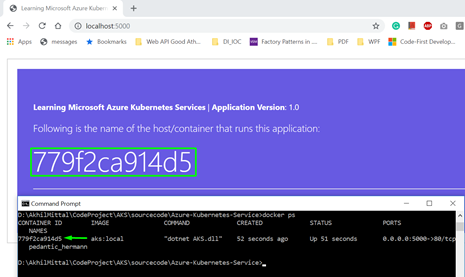 We see the application now running under docker container as the hostname now shows the ID of the container here.

For [container name], substitute the ID of the container as displayed in your browser or by running the docker ps command.

Deploy on a Local Kubernetes Cluster

There are two approaches to deploying an image on a local Kubernetes cluster: interactive and declarative.

Let’s start with an interactive example by running the following command:

Once the application is deployed, create a service to expose this deployment.

To connect to the service, launch the browser and connect to the localhost followed by the port number exposed on the node. Now I have opened three browsers and hit the same URL. 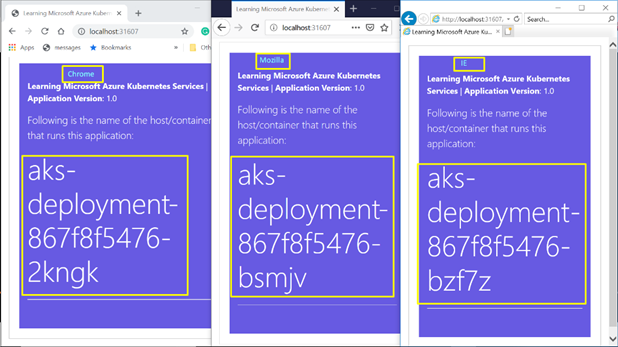 We see that the container hostname changes. That’s because behind the servers there are three pods, or containers, which the service is load balancing the request to.

Clean up the deployment and service by deleting them with the delete command.

Likewise delete the service as well.

The declarative approach uses pre-configured options saved in a deployment manifest file. I included a YAML manifest file at the root of the application: aksdeploy.yml.

Open the file and change the number of replicas (“replicas:”) to 3, and the image file name (“image:”) to aks:local. 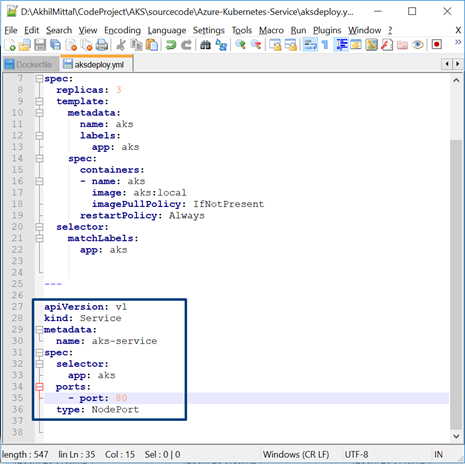 The following command command creates the deployment and service using the configuration in aksdeploy.yml.

Check the status of the service using kubectl get svc and then launch a browser to connect to the service. You should see the same result as the previous interactive demo, with requests spread across the available replicas.

Again, delete the deployment and the service, but this time by specifying the file name.

A key part of user containers is having them readily available in a registry. In this example we’ll push our Docker image of the application to the Azure Container Registry.

We’ll use the Azure CLI. Log into Azure using the az login command.

Create a resource group with the name as aksgroup and the location as australiaeast. (You can use your own location here as appropriate.)

Now create a container registry entry with the name learningaksacr, the resource group as aksgroup, the location as australiaeast (or your preferred location), and the sku as standard.

Once the container registry is created, the image needs to be pushed. First log in.

After successful login, before pushing, tag the local image with the login server name of the container registry.

Now, run the docker tag command. Specify the local image name, the new name (which is going to be the login server name), and the image name and the tag.

Verify this by docker image list command and we see the successfully tagged image. Both local and tagged image share the same image ID.

Now use the docker push command to push the tagged image to the registry.

This image can now be used or accessed by any other Docker machine or the AKS cluster can easily pull this image from the registry.

Before proceeding, create a service principal, registering the application to Azure Active Directory (AD), and create an identity for it. The registered ID is required if the application will expose itself to other Azure services.

Create a service principal using the Azure CLI with the command:

Once created you get the appID, displayName, URL, password, and tenant properties for the service principal. Keep this information for later reference.

Now grant the permissions to the service principal to pull the images from the ACR. I am using PowerShell window here.

Then grant the reader role to the AKS cluster so that it can read the images stored in ACR by using the az role assignment create command.

Use the appID that was provided for the service principal, and the scope is set to the resource ID of the ACR, which was fetched from the az acr show command.

Now create our AKS cluster using the az aks create command. Provide a name and the resource-group. For the node-count, make it a single worker node. Use the generate-ssh-keys to generate the SSH public (and private) key files. Specify the service-principal and the client-secret, which is the application ID and the password copied earlier. Run the command.

After the deployment is complete, and to connect to our AKS cluster from the client computer, use the kubectl command-line interface.

The .kube file located at the user’s location as shown in the following image contains the server setting set to a local server running on port 6445.

Get the credentials of our AKS cluster just deployed by using the az aks get-credentials command, specifying the name and the resource-group name.

Now, go back to the .kube\config and notice that server now reflects the AKS cluster running in Azure. To verify, execute the kubectl get nodes command. We can see a single node worker confirming the successful provisioning of our AKS cluster.

The cluster is all set for the application to be deployed into it now. Open the aksdeploy.yml file that we looked at earlier at the root of the application.

Currently the image is referring to a local Docker image. Let’s change it to refer to the image we pushed to our Azure Container Registry. Instead of the “image:” property pointing to aks:local, change this to the image name on the server with the tag: learningaksacr.azurecr.io/aks/v1:latest.

Earlier we deployed this application to the local cluster and used the service type as NodePort. Now that we’re deploying those to a cloud service like Azure, we can change the “type:” property to LoadBalancer. 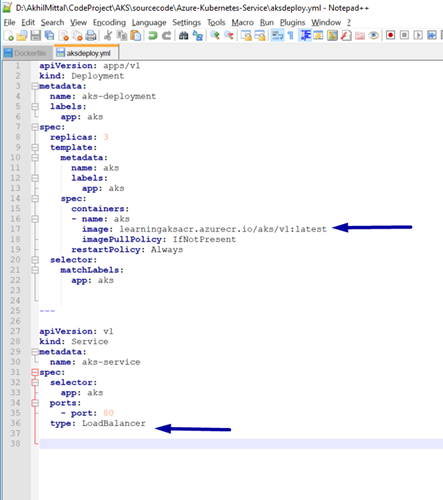 Save the file, then use the kubectl apply command for deployment.

This will create defined Kubernetes objects, which includes deployment and service. The service created exposes the application to the internet.

To monitor the progress of the deployment, use the kubectl get service command with the –watch argument. Initially, the external IP of the aks deployment service appears as pending. Once the external IP has changed from pending to an IP address, copy the IP.

To test your application, browse to the external IP address.

We can see our application running on a worker node within an AKS cluster.

Now you should understand how to containerize and deploy an ASP.NET Core application — or any similar microservice application– to Azure Kubernetes Services. We also explored the role of Azure Container Registry in the article.

While we took a detour to demonstrate deployment on a local system, hopefully this illustrated how easy it is to scale a Kubernetes deployment either interactively or through declarative configuration through a manifest.

WordPress Plugins and TomTom: Setting Up →