That’s all well and good for big companies, but how can smaller businesses — or even individuals like you and me — take advantage of ML? The barrier to entry has included knowledge of Neural Networks, Decision Trees, and other ML algorithms. Until recently, that meant a lot of effort to learn, and even more effort to put together the development tools, code and trained algorithms.

Well you’re in for some good news! Google recently introduced a new Firebase SDK called ML Kit that provides an easy way for you to use ML technology in your app. In this article we’re going to create an example app that allows users to take a picture, hand it off to ML Kit to do face detection, and play with the data that ML Kit will provide, in order to outline the features of the face. You’ll see how easy it is to harness ML technologies in your own apps.

Firebase is a development platform for mobile and web applications that provides easy access to Google infrastructure to help build applications quickly. ML Kit (currently in beta) provides code and APIs that help you build ML capabilities into mobile applications.

A lot of time is spent on steps 5 and 6, where we try to fine tune our model to identify better features and then test to see how it affects our accuracy. What we talked about above is a very simple, high-level list of the work involved in creating our model. There are a lot of other steps involved in creating an accurate and reliable ML model.

For most features, the SDK uses your phone to apply image recognition. Some features, however, also have the option to make a request to Google’s Cloud API to handle more complex processing.

In this article we’re going to use the ML Kit object detection features to implement a face detection app. Before we begin, however, we should differentiate face detection and facial recognition.

Face detection is pretty straightforward. It just means that our ML model identifies something in an image as a human face.

ML Kit provides a broad selection of face detection capabilities. In this article we’ll specifically explore the face contour detection features. Aside from just identifying the existence of faces in an image, ML Kit’s face detection also includes the ability to detect the locations of specific facial features (eyes, ears, cheeks, nose, and mouth), recognize expressions, track faces between frames in video, and do real-time detection in video streams. To learn more see the Face Detection guide in the Firebase documentation.

Now that we know a bit about machine learning, let’s look into our hardware and software. In the app that we’re building we’ll just be doing face detection. However, we’ll be doing it completely on a device using an Arm CPU-powered smartphone. Since we’re doing it locally, no data will be sent to Google Cloud’s API services.

Running the code directly on your phone provides high performance gains. If the code was run on Google Cloud, it could bottleneck due to network bandwidth and latency limitations. Another reason to run it locally is that it is better for user privacy, since no details about the faces are transmitted off of the device.

We’ll be creating our app in Android Studio using Kotlin, and we’ll be testing it on a Samsung Galaxy S10. We chose Kotlin because it allows us to leverage underlying Java capabilities with much more concise syntax.

I chose the Galaxy S10 for our testing phone. While this technology should work with any processor, for the best performance you’ll want a device with at least a Cortex-A75 CPU or, even better, the Cortex-A76 CPU. While the Cortex-A75 is already a great performer, the Cortex-A76 is more efficient and up to four times faster for machine learning workloads.

In addition to creating ML-optimized hardware, Arm has also been working with Google to optimize ML performance on Arm-powered Android devices. Arm’s software engineers have been hard at work integrating the Arm Compute Library and Arm NN backbone with the Android NN API. ML Kit is built on Tensorflow Lite, which uses Android NN under the hood.

Now that you know a bit more about the hardware optimization that’s being used, let’s get back to the software side of things, and finally start creating our app! To use ML Kit, we need to install the SDK.

Tutorial and it’ll be using Kotlin, not Java. 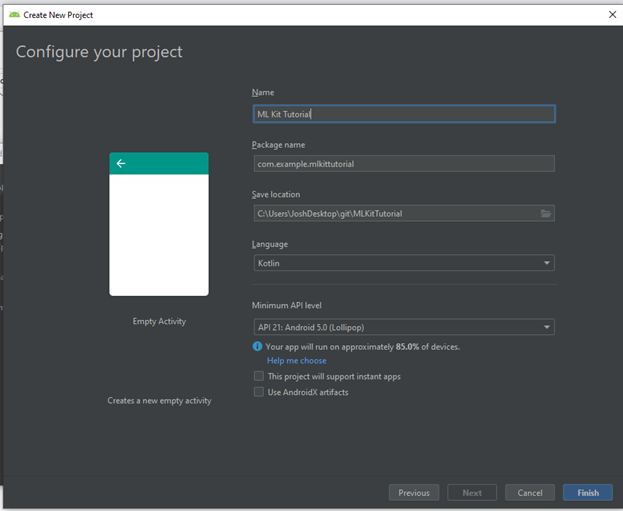 Now create a Firebase project that your app will connect to in order to access ML Kit. 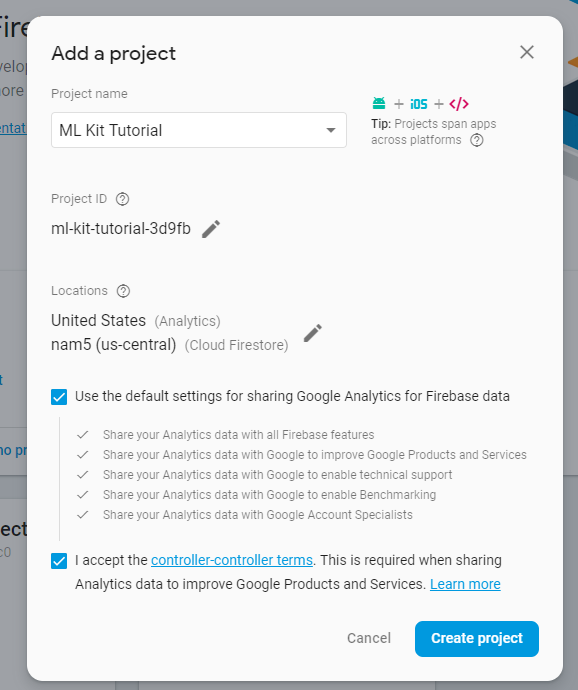 Register your app to your Firebase project. You need to set your application ID, which can be found in your build.gradle that is located in the app module. 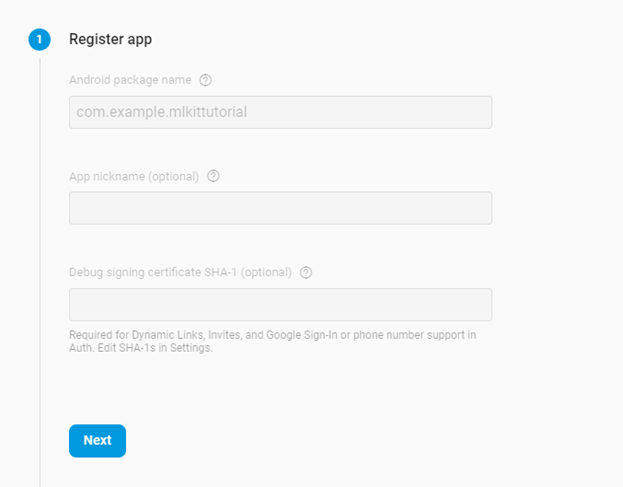 Next you’ll be asked to download a google-services.json file and add it to the root directory of your app module in Project view. This JSON file is part of the security process, in order to ensure that your app has permission to access your Firebase project. 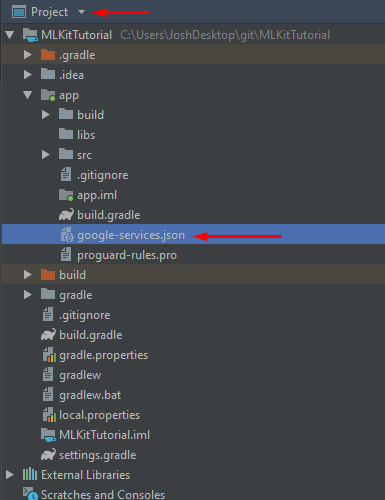 Now we can start adding dependencies to the build.gradle files located on the root of our application and the app module.

The first dependency, which we want to add google-services to the build.gradle file of the root directory is shown here:

Next, in the build.gradle at the app level, we need to add our google-services and the ML Kit SDK services that we want to use. In this case, the services are the face models.

Finally, after having edited both of our gradle files, we need to re-sync so gradle will download all of the dependencies you just added above.

After this, we now have everything we need installed to create a face detection app!

To build the app, we will have five steps when in use:

For this app we want to get images with Google’s Camera API. For the sake of simplicity, instead of creating your own camera app, I opted to use the built-in Android camera app take the picture.

This sample app is comprised of four files: Activity_main.xml, MainActivity.kt, GraphicOverlay.java and FaceContourGraphic.kt. For simplicity, the latter two files are borrowed from the Firebase Quickstart Samples for Android repository on GitHub. (Note that the code versions I’m using for this example were updated in the repository on March 14 2019. Since it’s possible future updates to the repository could introduce breaking changes, I’ll provide links to the exact versions below.)

Activity_main.xml sets up the application. 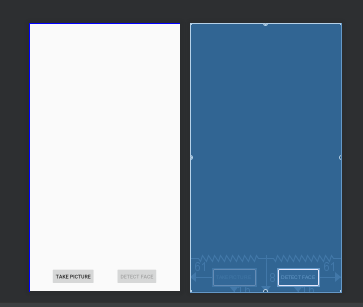 No need to worry too much about the numbers, I mostly eye-balled the location where I put the UI, so you’re free to modify them if you want.

One thing to note is that we created our own custom view called GraphicOverlay. We’ll talk more about this view later, but it is responsible for drawing the coordinates of the user’s facial features.

MainActivity.kt provides the code for the application.

The comments should be self-sufficient. However, the core logic of the code starts with takePicture():

To finish this app, we need to draw an overlay on top of our camera image. ML Kit returns a Face object that gives contour points in 2D coordinates where we can draw where the user’s facial feature is located.

While we now have the information of where the user’s facial features are located, ML Kit does not offer a solution to actually draw these points. Luckily for us, in this ML Kit example, there is some example code that we can leverage to draw these contour points on our image.

The first key to solving the puzzle is GraphicOverlay.java from the Firebase Android sample repository. This class is just a view container that will draw the graphics that we can add on top of our camera image.

The actual coordinate drawing is done in FaceContourGraphic.kt, also from the Firebase sample repository. This class takes in the Face object the ML Kit provides and then, using the coordinate points, draws the contour points on the canvas of GraphicOverlay.

With this, we now have a fully functioning app that takes images from a camera and then uses the data provided to us from the ML Kit, to draw the contour points of our facial features on top of the image!

You might also notice that the execution of this in the app is super quick, taking only a few seconds at most. Impressive!

In this day and age, being able to leverage ML capabilities in apps can give you a great competitive edge. Unfortunately, not everyone has the skills needed to be able to take advantage to incorporate trained ML models into their AI-powered apps.

Google is helping smaller companies fill in this gap by offering a suite of tools that enables developers to use ML on common scenarios, such as image and text recognition.

By using the ML Kit, developers save small companies and individuals massive amounts of time and money that would otherwise be spent on making their own ML Model. The process of gathering data, implementing an algorithm, and then training your model can take up to months, but by using ML Kit, you can get results in as little as 20 minutes!

How to Import and Export Excel Spreadsheets with C# and WPF →